We write our honest review, however, we may receive a commission from our partners to helps us to support this website. Prices can vary due to changes in promotions or policies.

What is a Paleo Diet?

If you’re not a foodie or keeping up on the latest diet programs, you may not have heard of the Paleo Diet. Otherwise, there’s a good chance you’ve heard of it and know at least one person who is on it or has tried it. As its name states, it is derived from “ancient” times, as the basic idea is to eat foods which have been around for centuries, since the Paleolithic era. This underlying belief is that the body was meant to take in certain foods which were readily available back at the beginning, before supermarkets came into being with their infinite array of choices. When we think back, the foods which come to mind are meats, plants, fish, nuts and berries. Indeed, these comprise the basic Paleo foods.

What you can eat In Paleo Diet? 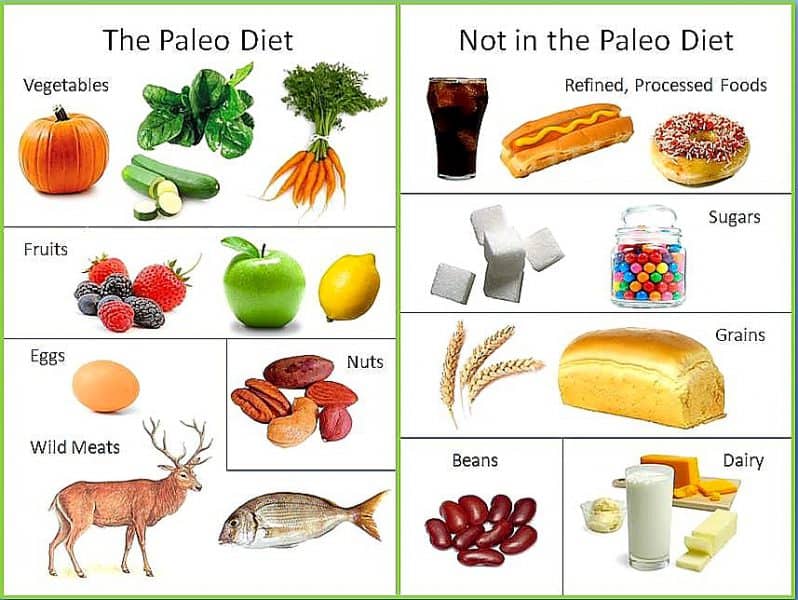 Meats and fish are the mainstays of the Paleo diet, especially for those who like meats. Lean cuts are the best choice, and if at all possible, the meat from grass-fed animals is the healthiest option. Avoid animals fed a corn-based diet. Fresh beef, pork, lamb, and skinless poultry are allowed, but they should be fresh, and not processed. Fresh fish and seafood should be on the table at least two or more times a week, and the best kinds are those with Omega 3 fatty acids, such as salmon, bass, halibut, trout or mackerel, sardines and herring. Clams, shrimp, lobster and other shellfish are also permitted. Round off your diet with eggs; nuts and seeds; all kinds of fresh fruits and vegetables; and healthy oils such as olive, walnut, flaxseed and avocado. If at all possible, it is best if these foods can be organically grown.

First foods to avoid are on the list of things your mom meant when she said, “if you can’t pronounce it, you shouldn’t eat it.” This would include all those chemicals and additives, which you wouldn’t be eating anyway if you’re sticking to the fresh foods recommended above. This means all those processed foods and sodas that fill grocery shelves and are oh so handy. Sugars and grains – wheat especially – are not allowed. Dairy foods of all kinds – including cheeses and yogurts – are not ancient foods, Legumes such as brown beans, corn, peas, lentils, and peanuts are taboo because they contain phytic acid, which interferes with nutrient absorption. Surprisingly, potatoes do not make the A-list, as they are labor-intensive to cultivate and do not occur in the wild. Other items to avoid are processed oils, salt, alcohol, and coffee. Finally, those unusual grains generally considered healthy are not recommended, such as quinoa, amaranth and buckwheat, but this is not a hard and fast rule and many Paleo eaters do eat them.

Benefits of a Paleo diet

The biggest benefit is feeling better and having more energy, which is noticed quite quickly after starting Paleo. The second biggest benefit is the healthy weight loss from the elimination of all of those simple carbs. Taking away the refined sugars means a decrease in blood glucose levels, which greatly helps diabetics and helps prevent diabetes. Leaner muscles result from eating a high protein diet which includes a lot of meat. Eliminating the wheat means eliminating gluten, which improves digestion but is a real boon to those with gluten allergies.

Paleo eaters experience less hunger between meals due to the high protein and high fiber in the diet. The Paleo diet is easy to follow, as it eliminates counting of calories or carbs, and the allowed foods are clearly identified. One amazing and very healthful benefit is the decrease in inflammation that follows from a diet rich in anti-inflammatory foods, since inflammation is the cause of many diseases.  The Paleo diet leads to better sleep and to feeling better on awakening. The body also reacts positively when fast foods, junk foods, and processed foods are eliminated, not only because of the chemicals avoided, but because the over-processing involved robs the food of nutrients. Last but not least, the body benefits by all the fresh fruits and veggies and by the detoxifying effects from lots of fiber in these natural foods. If these are organic, there are even more chemicals eliminated.

The negatives of eating Paleo

Though the foods on the Paleo diet are natural because they have come pretty much straight from the field or sea to the table, too much seafood can be problematic. It’s important to look for fish and seafood that do not contain high levels of mercury.  Salmon, cod, shrimp and sole are responsibly caught according to sustainable fishing practices. They also happen to be less affected by mercury, as their levels are considered safe. Trout, being a freshwater fish, also has less mercury.

Because the cost of meat is high, it could get expensive basing one’s diet on meat, especially organic meat. Furthermore, the science is not settled on the benefits of eating so much meat – tests have shown that eating meat also increases insulin.  Another study has found that women on a Paleo diet ended up with an iodine deficiency because sea salt is substituted for table salt since table salt is not allowed.

But possibly the biggest problem with the Paleo diet has to do with the basic precept that eating more like our ancestors of centuries past will be better for us. It is impossible to eat like our ancestors when the environment is not as pristine as it was then. Back then, the seas and streams had no mercury, no pollution, no radioactive waste, and the soil had not been depleted of nutrients. It might be hard to find fish that aren’t tainted. Besides, much of the fish in the market is farm-raised and not the same as wild fish. This basic principle of eating ancient is a challenge unless it’s possible to obtain truly organically-fed, free-range animals as a basis for our meat, and wild-caught fish. It may be that at the end of the day, a truly authentic Paleo Diet is very difficult to bring about.

Solutions for maintaining a Paleo Diet:

If, after evaluating the pros and cons, you’re considering beginning a quality Paleo Diet, or already are following this diet routine, you realize that it’s hard to come up with new ideas of great meals every day. From our experience, using a meal kit service can be a very handy alternative!

Some of the meal kits services offer great options for Paleo diet followers. With such a subscription, you will receive delivery of a weekly box containing pre-portioned and ready-to-cook meals that are 100% Paleo-based.

The best meal kit company to support a Paleo Diet is Sun Basket, due to their insistence on sourcing meat, eggs and produce from farmers who follow sustainable, organic practices and fisherman who provide wild-caught seafood.

With their Classic Plan, you will receive three meals every week which serve two to four adults. The servings are generous – including more meat and veggies – but with fewer carbohydrates.  Not only are the meats and seafood nice and lean, but the animals are responsibly raised, without the use of antibiotics and hormones. Sun Basket even states they use only wild-caught seafoods that are recommended by the Monterey Bay Aquarium Seafood Watch® Program.

The eggs are from cage-free, pasture-raised chickens.  The fresh produce is organic and sustainably-sourced. Sauces are freshly made. Sun Basket promises that there is no gluten and there are no grains, soy, corn, dairy or processed ingredients in their Paleo Plan.  And we’re happy to say that Sun Basket Meal Kits are offered to all 48 continental states in the US.

We managed to get our readers a great beginners deal. To order your first Sun Basket Paleo box click here: